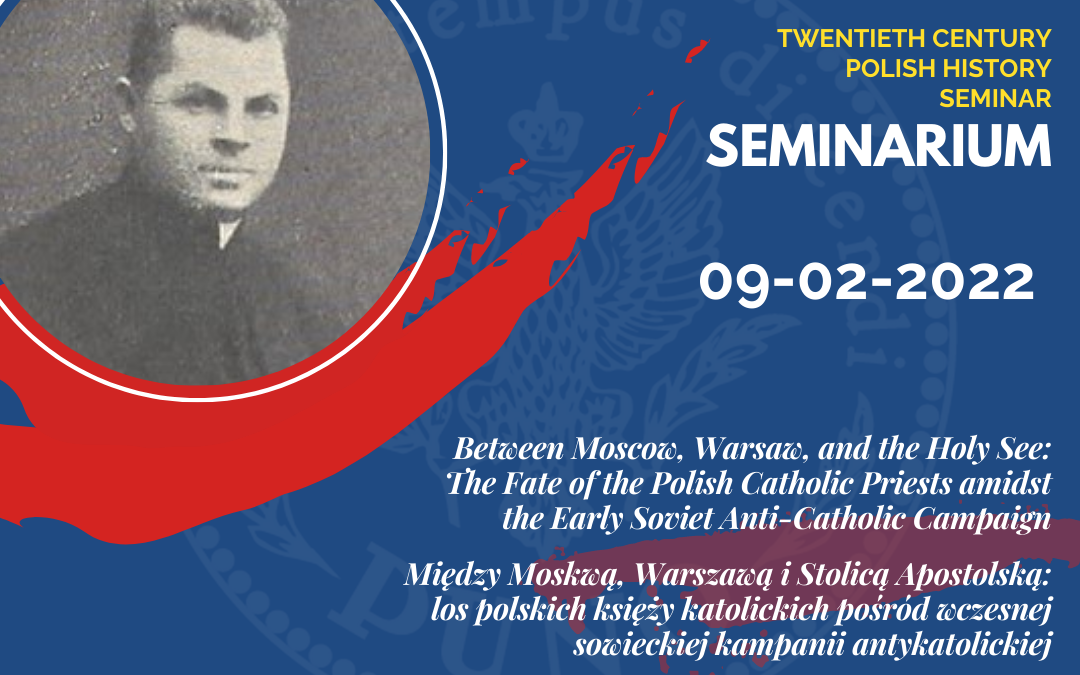 The seminar series on twentieth century Polish history was initiated at PUNO in 2013. It provides a forum for scholars and the wider public to engage with new historical scholarship. Scholars from a range of British and Polish universities have presented research in progress and discussed their recent publications. Details of previous seminars can be found at https://puno.edu.pl/xx-polish-history-seminar/ The seminar is open to the public and is especially useful for students reading MA or PhD degrees in history or cognate disciplines. The seminar is conducted in English. This academic year, due to the Coronavirus pandemic, the seminar will take place online. Those wishing to participate should contact the convenor prior to each seminar: fleming_m11@hotmail.com

Between Moscow, Warsaw, and the Holy See: The Fate of the Polish Catholic Priests amidst the Early Soviet Anti-Catholic Campaign

This paper offers a micro-history of Soviet anti-religious actions during the mid-1920s through a reconstruction of the investigation case of Father Andrzej Fedukowicz and his forced collaboration with the Soviet secret services. In November 1924 Fedukowicz was forced to sign a letter to Pope Pius XI and a year later committed suicide to avoid humiliation caused by his actions. This investigation reveals how elaborate the Soviet secret services’ techniques for dealing with uncontrolled religious allegiances had become during a more tolerant ‘religious NEP’, the period which came to replace the overly repressive measures of the civil war period. The article aims to challenge the conventional impression of powerful and effective Soviet secret services. Detailed analysis of the process of fabrication used by the secret services shows how often rudimentary methods of the secret police could easily threaten the success of the entire operation. In this regard, the limited results the secret services had achieved by relying on individual assets led to toughening of mass repression and a more aggressive anti-religious campaign after 1929.

dr Olena Palko is a Leverhulme Early Career Fellow at Birkbeck, University of London. She is the author of ‘Making Ukraine Soviet: Literature and Culture under Lenin and Stalin’ (Bloomsbury Academic, 2020) and co-editor (with Constantin Ardeleanu) of the edited volume Making Ukraine: Negotiating, Contesting, and Drawing Borders in Twentieth-Century Ukraine (McGill Queen’s University Press, forthcoming).