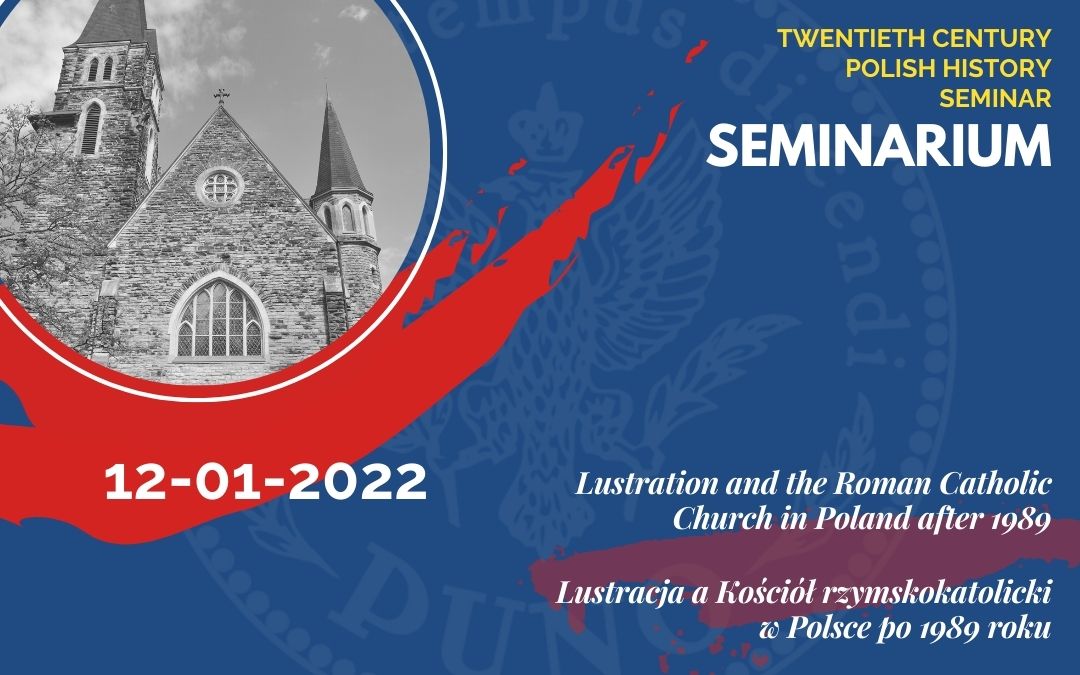 The seminar series on twentieth century Polish history was initiated at PUNO in 2013. It provides a forum for scholars and the wider public to engage with new historical scholarship. Scholars from a range of British and Polish universities have presented research in progress and discussed their recent publications. Details of previous seminars can be found at https://puno.edu.pl/xx-polish-history-seminar/ The seminar is open to the public and is especially useful for students reading MA or PhD degrees in history or cognate disciplines. The seminar is conducted in English. This academic year, due to the Coronavirus pandemic, the seminar will take place online. Those wishing to participate should contact the convenor prior to each seminar: fleming_m11@hotmail.com

Lustration and the Roman Catholic Church in Poland

This paper surveys and analyses the attempted lustration of the Roman Catholic Church in Poland after 1989. It is important to remember that religious institutions were not included among the targets of the 1997 and 2006 lustration laws. The exemption of the clergy from formal vetting processes should not come as a surprise, given the dominant narrative of post-communism and, to some extent, of former democratic opposition, which portrayed Polish Catholicism and anti-communist opposition as synonymous. After the death of Pope John Paul II in 2005 and the 2006 amendment of the lustration law by the Jarosław Kaczyński government, representing the Law and Justice party (PiS), the Polish public was galvanized by press revelations about the infiltration of the Catholic Church by the communist security police.

Tied to the attempted lustration of the Polish clergy are the cases of three well-known clergymen accused of being former police informers: Reverend Michał Czajkowski, Archbishop Stanisław Wielgus, and Reverend Henryk Jankowski. While the affairs of Czajkowski and Wielgus concerned leading personalities of rival currents in contemporary Polish Catholicism and revealed a nuanced picture of church-state relations in present-day Poland, the story of Jankowski adds context to the paedophile scandals affecting the Roman Catholic Church. This paper argues that child sexual abuse by priests, nuns, and members of religious orders has obliterated the lustration of the church as an important issue in Poland.

Mikołaj Kunicki is an Adjunct Professor at the Institute of Journalism and Social Communication, University of Wrocław. Before coming to Wrocław, he taught history at the University of Oxford, University of Notre Dame and University of California at Berkeley. From 2013 to 2016 he was the director of Programme on Modern Poland in St Antony’s College. Kunicki received his PhD in History from Stanford University in 2004. His research concentrates on communism, nationalism, authoritarianism, Catholicism, and their relationships with popular cultures of cinema and performing arts. He is the author of Between the Brown and the Red: Nationalism, Catholicism and Communism in Twentieth Century Poland (Ohio University Press, 2012) as well as articles and book chapters on 20th-century Polish and European history, cinema, nationalism and contemporary politics. See https://www.ohioswallow.com/book/Between+the+Brown+and+the+Red